"All Means All" - How Grand Prairie ISD Ensures Access to Literacy

Early in her career as an educator, Grand Prairie Superintendent Dr. Susan Hull attended an event for business leaders.

A man was delivering a presentation on his experience in the business of producing ice cream. He credited his company’s success to their insistence on using only the highest quality ingredients. In particular, his blueberries, he assured his audience, were each handpicked, with only the very best making it into the final product.

At this point, Dr. Hull raised her hand to speak: “I think that's where we are different in the world of education.” The gentleman stopped, curious to hear more.

“Our blueberries are our kids. And unfortunately we can't throw away those that have been bruised or damaged. We take those and we spend extra time with them, because when we look at our blueberries, every single blueberry counts. All means all.”

“And so she shares that with us,” said Mary Jane Bowman, a friend and former colleague of Dr. Hull’s who related this story to me. “It continues to be her legacy because she would remind us that when we're looking at our kids, especially in the district that we're in, many do come to us bruised and damaged and in many different capacities, but we don't get to pick and choose which ones we're going to keep in our barrel versus the ones that we're going to throw away.”

Sadly, Dr. Hull passed away in a tragic accident earlier this year. But as Bowman alluded to, her legacy persists in the continued success of each and every one of her district’s students, particularly as it relates to early literacy.

“‘All means all’ is such a cliche in education,” Bowman continued. “But oftentimes I want to stop people and say, ‘what does that mean?’ Because I think what Dr. Hull did well is that if you asked anybody in the district, what is our number one goal? Student achievement. For all students.”

As we enter a new year, Texas state and local leadership will be hard at work implementing House Bill 3, a massive school finance reform bill that promises to put over $6 billion towards initiatives aimed at increasing student achievement, and in particular early literacy. And Grand Prairie ISD, which currently outperforms the state in 3rd grade reading for its low income and English-learning students, is serving as a model for that work.

“It was always about the kids,” Bowman summarized. “And the cool thing was, the more we focused on the kids and getting them ready, all of a sudden we look up and the data is there.”

So what does the data show us? And more importantly, what did educators like Dr. Hull and Dr. Bowman do to work towards these incredible results?

“Education was never in my path.”

A stock broker with a business and finance degree, MJ Bowman never thought she’d end up in the classroom. But a growing family and desire to “be on the same schedule” with her son opened her mind to the possibility. “And the minute that I walked in this classroom, my heart just melted for these kids. And so 22 years later, I'm very passionate about what I do.”

That passion comes, in part, from seeing herself in the students she serves. “I come from poverty. My mom was a single parent and a second language learner. I moved from the Philippines when I was eight years old. So every day I go into into a campus or a classroom, I literally see myself in the kids that we get to serve. That's why it's so much more than just a job.”

Bowman worked in classrooms in Las Vegas and Mansfield before being hired in Grand Prairie as the Director of Literacy, Dyslexia, and PK-12 Interventions in 2012. At the time, different grade levels used different literacy assessments, making it difficult to track students’ progress. It was MJ’s job to bring everyone into alignment. The results, after a year of working toward that goal, were discouraging.

“The data indicated that we were losing students in kinder and first grade. I was invited to Dr Hull's office. She's very to the point: ‘tell me where we're at and then when are we going to go ahead and do it.’ And so I presented to her the data and she said, ‘okay MJ, I get it, so what are we going to do about it?’ I said, I think what we need to do, based on our data, is create a literacy academy for our early education teachers.”

So, with support from her superintendent and Region 10 of the Texas Education Agency, that is exactly what Bowman did. “We developed a three day literacy academy in 2014. Day one [was] a training on phonological awareness [the recognition of letter and word sounds]. Day two, they were given a sample classroom and they had to be able to group the students. And then from there, they went through a rotation where students were getting stuck and an instructional coach modeled for them what instruction looks like.”

One of those coaches is Jean Ann Holt, who approaches her work with fellow educators in the same way she approached her work when she started as a teacher in Grand Prairie eighteen years ago. “I can see how I can inspire the teachers that are like the struggling students,” Holt said. “You see the struggling teachers, those that just need some confidence or need a little help here or there and someone to believe in them. I think that makes a difference for the kids.”

“We're very intentional about professional development,” Bowman continued. “We all share the belief that our greatest resource is our classroom teachers, and if we treat and provide them with the support that they need to do their job, then I think we have a greater chance of holding onto them. So we’re always trying to figure out effective ways to empower teachers.”

And not just teachers. Bowman also seeks to empower her principals. “Every year, no matter how long they've been a principal, at the very beginning of the year, I walk them through the components of reading and the science of teaching reading, because they are the instructional leaders on their campus.”

Perhaps most importantly, this responsibility extended all the way to the very top: “[Superintendent] Hull was held accountable to K-2 literacy goals, and had to be presented every January to the school board. That became a part of her evaluation, so that we send the message that we're willing to do the work from the top down. Everything we did in terms of expectations and training had to be able to support that model or that belief.”

Doing this transformative work from the top down also meant breaking down barriers between different departments. “I've collaborated very closely with our counseling department, our special ed department, our 504 department, our assessment, our bilingual. We're trying to break down the silos.”

This collaboration extends throughout the district and across the entire community. This year, Commit Managing Director Dominique McCain connected Bowman to Dallas Afterschool, who were able to help develop a four-week reading summer camp for GPISD students. “We had a little over 400 kids participate and we're seeing it in our data this year for multiple campuses.”

Bowman and GPISD have also been working directly with Commit to prepare for the implementation of HB3, alongside the literacy specialists and early childhood directors of nearly every school district in Dallas County.

“We started this conversation way before the law was passed so that they were really informed along the journey of the bill,” McCain explained. “Now we're at a place where the law has been passed and we just want to make sure that they are super, super clear about how this works. Because every district is on the journey at a different place. Are we all responsible for HB3? Absolutely. But how ready we are varies from place to place.”

Grand Prairie, it seems, is more ready than most. That’s because one of the largest requirements of HB3 is the creation of reading academies to serve the early educators of every school district across the state of Texas. And the curriculum is one Bowman and her team have already been using in their training sessions for several years. As Bowman put it: “There's power for our teachers to be able to say 'we've been doing this.'”

Jean Ann Holt experienced this power firsthand when she brought her teachers to a recent TEA training in preparation for the change. “I could see by the expression on some of the other teachers that were taking notes: 'I've never heard this in my life.' And ours are like, we did this. I already knew this. So it put some faith back. They realized we were doing the right thing for them.”

But Commit is not just helping districts prepare for statewide mandates. McCain and fellow Managing Director Kim Manns also help ensure that those mandates are realistic and informed by the experience of districts already doing the work. Districts like Grand Prairie.

“Every time I convene a group of stakeholders, they really are the experts.” McCain stated. “They are the ones with the answers. They can give you the data, can state you the facts, can share the stats, can read you the law or tell you the law verbatim. You hear MJ firing off statute by number because that's her work. It's not that we don't have the right people. My perspective is that we haven't really given the guidance.”

Now, with the help of Commit, stakeholders like Bowman are able to not only comply with state law, but help guide it. Just this week, the Texas Education Agency announced its Reading Academies will include a bilingual pathway. That’s because MJ Bowman knew the importance of breaking down silos. It’s because Dominique McCain helped bring Bowman’s knowledge and experience to the table. And it’s because TEA administrators were willing to listen to stakeholders and act upon feedback.

“We need to implement not just with fidelity, but with integrity, which includes and embeds consistency,” McCain asserted. “The science says what works in dual language works for everyone. What works for dyslexic students works for everyone. I'm not by any means proposing we integrate every classroom, because we know there are some specific practices that have to be done. But philosophically, if we pull ourselves out of this siloed mindset around the work, it is like a beautiful orchestra. And I see the places where it can happen very easily. We know GPISD is doing it.” 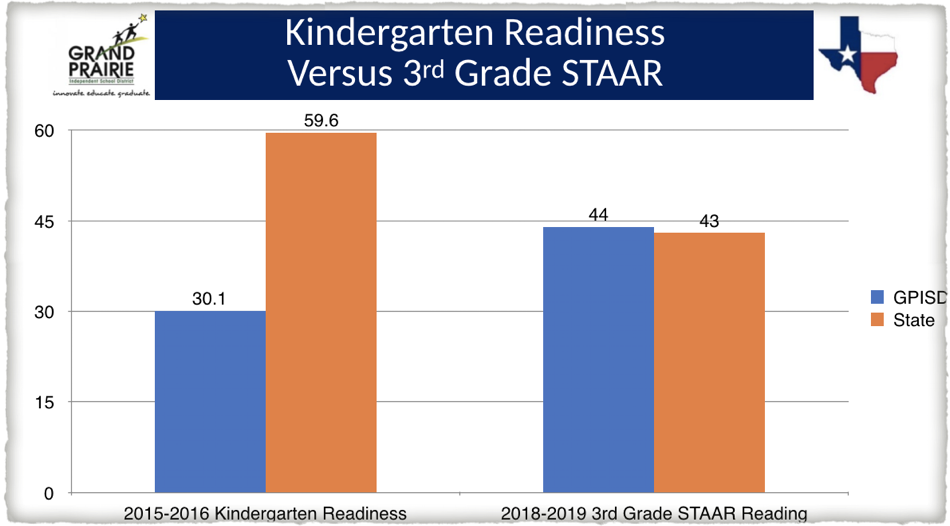 In the 2015-16 school year, only 30% of incoming GPISD students were considered “kindergarten ready,” compared with nearly 60% of the state. After three years of instruction under early educators trained in GPISD’s reading academies, this same exact cohort of students surpassed the state in 3rd grade reading scores, despite a disproportionate share of low-income students and English language learners.

“This reading thing hasn't changed,” Bowman concluded. “And I know teaching reading is rocket science, as [literacy expert] Louisa Moats said, but I think we also have to bring it to a level of practicality and application. We really only get one chance within each grade level to make a difference in the child. And literacy should be a right. It's not something that belongs to only a certain group of people. Your zip code doesn't determine your ability to learn.”

Or, to put it another way: In Grand Prairie and, increasingly, the state of Texas, all really does mean all. 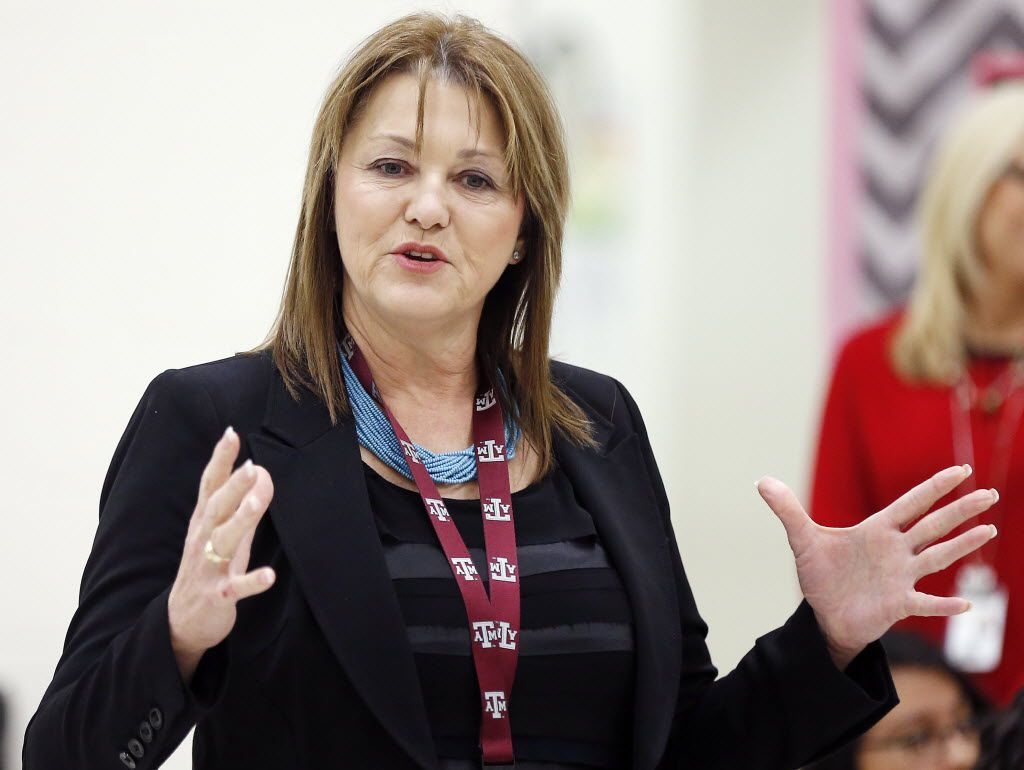 Dedicated to the memory of Dr. Susan Hull
Return
Share This Story
Next

Kelvin Walker Joins the Commit Board of Directors